Every time I pull a Nazem Kadri card in my breaks, I can’t help but feel a twinge of sadness. I can’t understand why the hockey Gods don’t give this guy a break with the big club. I personally feel that maybe he deserves a break with another club. A club that will cherish his offensive flair. Teams gave Alex Kovalev, the Kostitsyn brothers a chance to shine while they all share their one dimensionality style of play.

Here is a cool card i pulled during a break of Panini or Donruss Elite. On a selfish level, I would love to see him play. But life isn’t fair and we deal with it the ways we can. If he doesn’t stick next year, I hope to dear God he goes somewhere where he will be appreciated. Just not the Rangers, it was bad enough he had bad coaching thus far, I couldn’t bear to see Torts rip him a new one lol. If he can survive under Dale Hunter, He can survive anywhere in my opinion!

Wish you the best of luck Kid! 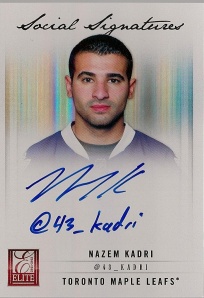 3 responses to “Nazem Kadri: Give the kid a break! Donruss Elite Hockey”